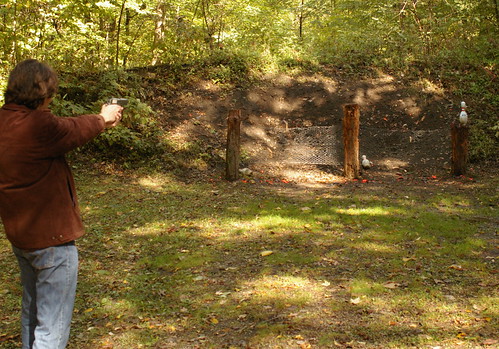 It seems that over the last decade there has been a rise in mass shootings that capture the headlines, and included in this rise has been calls for more control of the tools that were misused to commit these crimes, firearms. Because firearms, like many other tools, have the potential for lethality , many pundits view gun control as a public health issue. However, most of those wrongly believe that further legislation limiting the legal possession and ownership of guns will decrease the incidence of crimes committed (by people who don’t follow the laws anyway) with firearms. Guns are a public health issue; they are a force equalized allowing the weaker prey to be less apt to become victims to stronger predators.

A mother of two in Loganville, GA retreated to an attic space with her young children when a criminal broke into her home with the intent of robbing the family. When the intruder heard her, rather than fleeing, he, armed with a pry bar, pursued her and when he opened the door to the attic, she emptied the .38 revolver into him at point-blank range, striking him five out of six times. The intruder then fled the house and was later arrested. Under current law, she was allowed to have that firearm in her home, and according to Georgia law, she was justified in using it to defend herself and her family.

Under current federal proposals, and in the state of New York, possessing a weapon with a larger ammunition capacity would be illegal. The criminal pursued her with the apparent intent to do her harm, but if there were more than one criminal, even if the others were unarmed, then the likelihood that she or her family would be seriously injured was high. This is why limiting the weapons law-abiding citizens can use is a public health issue.

An employee for Domino’s Pizza was making a delivery to a high-crime apartment complex in Wichita, KS when he was approached by a criminal with the intent to rob him. This employee was carrying a legal handgun and fired at the criminal who then fled. Due to his attempts to defend himself from a violent crime, he was fired by the restaurant, even though charges were not filed. He defended himself and very well may have prevented more crime in the area by making the apartment complex a little bit more dangerous for criminals. In one small way, and despite the gun control policies of his employer, he may have helped improve the public health of that area.

Many gun control advocates point to the United Kingdom and its extreme prohibition as proof that their policies work. This argument falls flat when the overall violent crime between that nation and the United States is compared. In the UK, the violent crime rate in 2011 was 35.61 per thousand while in the US it was 3.83 per thousand, a tenfold difference. Looking at overall crime shows another interesting story. The UK and Japan have similar gun laws and the overall crime rate in Japan is 22.33 incidences per thousand while the overall crime rate in the UK is 104.14. Switzerland and the US also have similar gun laws and their rates are 38.91 and 37.80 respectively. Clearly something besides the gun laws, restrictive or otherwise, is behind these crimes. Since crime, and especially violent crime is a major concern for public health, the focus on gun control as a means of reducing crime is an important public health consideration.

Mayor Rahm Emanuel of Chicago is wanting to combat the crime in his city. While this is admirable, his solution is to further restrict the legal ownership and use of firearms. Currently, the state of Illinois and the city of Chicago have some of the most restrictive gun laws in the US and yet the rate of violent crime: murder, rape, and assault, is 6.54 per thousand population. In a similarly sized city, Houston, TX where the gun laws are some of the most lax in the nation, the rate of the same violent crimes is only 6.00. This leads to the question of whether increased restrictions are the answer.

Many in Congress are pushing for a renewal of the “assault weapon” ban. Sen. Dianne Feinstein of California is a leading proponent of this legislation. Unfortunately, the weapons specifically mentioned in her legislation are structurally identical to other weapons allowed by the ban. The usual criteria used in determining the status of the weapon are things like a folding stock, a synthetic-material pistol grip, or a bayonet fitting, none of which determines how accurate the weapon is nor how much force is delivered by the weapon, both of which are critical in determining the lethality of the weapon.

One of the major arguments for more stringent gun legislation is that controlling guns is a public health issue. While reducing crime is indisputably a public health concern, there is no real evidence that reducing the number of weapons in the hands of law-abiding citizens will reduce said crime, and there is actually quite a bit of anecdotal evidence that it will actually increase crime by making victims less able to defend themselves. Mass shootings get in the public consciousness and lead many to scream for more laws, but they fail to take into account that the three deadliest criminal actions on American soil: the September 11 Attacks, the bombing of the Murrah Federal Building, and the Bath School Disaster in 1927, all totaling 3,209 deaths, were perpetrated without the use of a single firearm.

Health educator Jack Powell enjoys sharing with his readers advice on how to maintain a healthy lifestyle as well as public health concerns. Jack has also contributed to educational material which can be found at MPH Online, a terrific resource for those interested in a career in public health.