According to the American Lung Association and the World Health Organization, these five cities have the cleanest air in the U.S.

People choose a place to live based on all sorts of factors, good job opportunities, a high quality educational system, readily available entertainment, beautiful scenery, cost of living and even how they rank on a list of the best places to live. But those concerned with their health, particularly people with asthma, lung disorders, heart problems, or severe allergies, can live longer, healthier lives in cities with low particulate pollution and the absence of ground level ozone. The American Lung Association and the World Health Organization have both surveyed U.S. cities to find those with the cleanest air. Breathe easier in one of these top ranked places.

For those who prefer a warmer climate, Santa Fé has kept their population of 188,210 in check with strict rules about outdoor burning and other such activities that are known to cause poor quality air. The 1.5 million acres of natural forest surrounding the city help filter the air and reduce pollution.

It is one of just 20 cities nationwide that consistently have safe ground level ozone levels, and is an art lover’s dream with all the local artists and galleries. One local artist even built a sculpture that measures particulate pollution, another incentive for locals to take care of the air they breathe.

Bismarck ranks number 11 on the list of cities with the lowest year round air pollution. The ozone levels here are always below danger levels, aided by its remote location. Bismarck doesn’t lie downwind of any pollution laden cities, so its population of 106,286 has no trouble keeping their air quality safe and healthy.

Bismarck is also one of the coldest areas in the U.S., but the cold helps control ground level ozone. Bismarck residents went one step further to secure the quality of their air, founding the Bismarck Tobacco Free Coalition and making most of the city a smoke free zone.

Great Falls is one of the most scenic cities on this list, and the 82,178 residents have incentive for keeping their air clean so they can enjoy the spectacular outdoors here. Great Falls is small, and like Bismarck, does not sit in the path of smog or pollution from any nearby offending cities. The residents here recently rejected plans to build a coal powered plant nearby, assuring that the air quality of Great Falls will remain pure for years to come.

Wouldn’t it be wonderful if your doctor prescribed Honolulu for your asthma? This busy metropolis manages to keep particulate pollution and ground level ozone levels down even in the midst of 907,574 residents and millions of tourists.

Because Honolulu is some 2,000 miles away from other polluting cities, and gets help from frequent rains and generous Pacific breezes, they manage a safe air quality in spite of their large population, making it one of the best places to live for clean air.

So whether you like big cities or small, tropical weather or four seasons, there’s a city where you can breathe clean air and enjoy the lifestyle you desire.

Jeff Schultz is an Atlanta-based travel enthusiast and writer contributing to blogs and publications around the country. 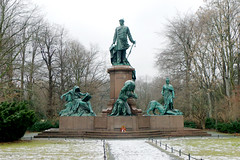