There are may people who have problems with the way their noses look. This may be as a result of defects at birth or even as a result of an accident. There are even those people who do not like the sizes or shapes of their noses and would like this changed. This is where rhinoplasty comes in. This is a form of surgery that is meant to help reshape the nose. This form of cosmetic surgery has the ability to change the shape as well as size of the nose. This procedure also plays a great role in helping in situation in which the an individual has problems breathing as a result of chronic congestion. During this procedure, the surgeon is expected to make incisions in order to be able to gain access to cartilage as well as bones that help in supporting the nose. The incisions made by the surgeon are normally done inside the nose to ensure that they are concealed after the procedure is complete.

During the operation, the surgeon has to use an anesthesia, be it local or general. An individual who goes for this procedure can expect to go back home after it is done as it is considered an outpatient procedure. However, there are some cases that the surgery may warrant one to spend the night at the hospital or wherever it is he or she gets the surgery. It is not any surgeon who can perform a rhinoplasty surgery. Such a surgeon needs to be trained in either plastic surgery or otolaryngology.

There are a few things that one needs to expect after the surgery is done. First and foremost, one needs to understand that the packing within the nose will stay for 2 days while the bandages will stay for at least a week. During this time, one will feel puffy around the face with some areas remaining swollen for days. It is advised that during this time, cold compresses are used to help reduce pain as well as the swelling around the face. One may also be required to be under pain medication for at least a week as may be prescribed by a qualified doctor. For some weeks, one is expected to stay away from strenuous activities that may lead to injuries on the healing nose.

Rhinoplasty is additionally a procedure that can only be done on a nose that is fully developed as performing such a procedure before the nose fully develops may lead to altered surgical results as well as some complications. This is all due to continued development.

As the case with any surgical procedure, nose jobs come with risks. The most common side effect associated to this procedure include swelling and bruising that is temporary around the eyes as well as nose, bleeding, damage to the septum as well as skin problems. Other problems related to the procedure include catching of infections and nasal blockage as a result of swelling within the nose. There are also complications related to anesthesia.

When going for rhinoplasty, it is very important for one to know that this is a type of surgery that can alter the he or she looks. This is due to the fact that the nose is a prominent feature on the face and altering it even slightly may affect how one looks. One needs to settle for a surgeon who is well trained, experienced as well as one who he or she can trust to get the right advice from concerning the whole rhinoplasty procedure. This way, one can be sure to get the kind of results he or she wants.

By Dennis Brill, who underwent rhinoplasty surgery in 2009 in an effort to repair a deviated septum. The successful surgery was performed in San Francisco by Dr. Ramin A. Behmand, a well known cosmetic surgeon in the Bay Area. 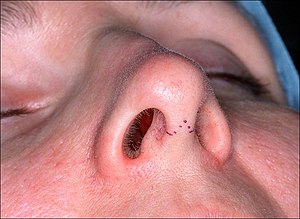