Braces have a deeper history than you might think. With the advances in modern dentistry and orthodontics and the sleek, easy to wear braces that come along with these, you may think that braces are simply a modern teeth straightening device. The desire for straight teeth, however, has ancient origins and braces have evolved a lot over time. While orthodontics as a science is a relatively ‘recent’ development in the span of human history, the practice of teeth alignment through dental devices is something that has been going on since the early Etruscan and ancient Greek civilizations.

Braces as we recognize them were a very long way off when the first humans began using devices to straighten their teeth. In archeological finds, mummies with crude metal bands wrapped around their teeth have been discovered. Greek philosophers Aristotle and Hippocrates both wrote on methods of straightening teeth and there existed crude appliances to adjust teeth in this early era. Archeologists have also found evidence of early braces in Roman tombs with corpses displaying teeth bound with gold wires–one of the earliest examples of ligature wire. As time went on, it was recorded in medical histories that teeth could be treated and straightened through pressure. This was an important breakthrough in the development of orthodontics and braces treatments.

Correcting misalignments in the teeth and jaw has been a focus of dentists since the early seventeen hundreds. Dentists in this era began publishing more material on correcting misalignments in the mouth. One early device that mimicked modern braces was called the ‘bandeau’ and was a horseshoe shaped piece of metal used to expand the arch. This device was invented and perfected by a number of French dentists in the mid-eighteenth century. The advancements continued when Scottish surgeon John Hunter published a history of the human teeth and wrote on concepts like teeth alignment and extraction to improve dental health. By the turn of the nineteenth century, the field of orthodontics was in its nascent stages and dentists were developing more effective dental appliances to correct problems and improve alignments.

Once the field of orthodontics had blossomed and more published research on the nature of manipulating teeth emerged, more advanced braces were developed. Several dentists in the nineteenth century published studies on oral deformities and irregularities in the teeth and how to correct them. These studies eventually led to better designs in dental devices and, in particular, braces. One dentist, J.N Farrar was the first to suggest that using mild force at timed intervals could move teeth and set them into alignment. This was a breakthrough in orthodontic research and further propelled the field into the mainstream medical professions. By the early Twentieth Century, malocclusions were classified to determine the degree of dental misalignment to help determine a proper treatment plan. Edward Angle was the orthodontist responsible for this system and he furthered the development of orthodontic devices and founded the first college of orthodontics. The American Society of Orthodontia and the first orthodontic journal were founded soon after.

Braces in the 20th Century

Throughout mid-century, braces would grow in use to treat malocclusions and they would, in turn, develop in form. Braces in the early to mid-twentieth century were crude compared to standards today, but they were much more sophisticated than they ever had been before. Loops, hooks, spurs, and ligatures were formed using gold, silver, steel, gum rubber, and even zinc or copper. Wires, bands, and clasps were also commonly made with gold or silver. Gold was very malleable but was highly expensive. Early braces featured bands that wrapped around each tooth and required frequent adjustment.

By the 1940s and 50s, stainless steel became more widely used in braces and the bands continued to be wrapped around the teeth well into the 1970s. At this stage, proper adhesive had been developed and braces started to be bound to the teeth directly. While bonded brackets were developed in the 60s, the adhesive wasn’t perfected until the 70s. The self-ligating bracket was also popularized at this time, eliminating the need for tie wires or ligatures to hold the archwire onto the bracket. Throughout the seventies, eighties and nineties, braces technology continued to develop rapidly with the emergence of lingual braces that were fitted on the inside on the teeth to conceal the device and Invisalign braces–transparent plastic fittings worn over the teeth for alignment. Today, braces are more efficient than ever, but they owe their form to a long history.

Ben Vaughn enjoys studying history and has researched many topics ranging from the evolution of braces to ancient plumbing systems. Ben has worked with McDonough Orthodontics, a Salt Lake City orthodontist, to learn all about the evolutions of braces and how modern braces came to be. 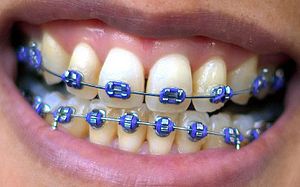