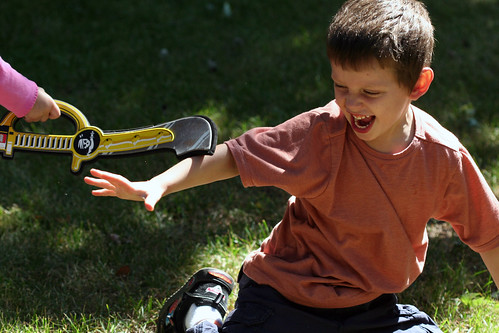 So maybe the sky is a bit greyer right now and the wind’s blowing a little bit colder. Does that mean your kids should just curl up on the sofa with their X-Box controllers? Does it heck! Those kids need two things- an assortment of layers and a good reason to run up and down to keep warm. Well, you’ll have to provide the jumpers, scarves and coats yourself, but we have some great outdoor games for keeping warm right here.

Duck, Duck, Goose is one of the classics. Get four or more children sitting in a circle. The first person goes around the circle, tapping players on the shoulder as they go past. As they tap each player they must choose whether to call them “Duck” or “Goose”. Ducks stay sitting. Geese have to get up and race the tapper around the circle until they reach a gap. The person who gets to the gap last has to stay standing up, and they become the new tapper.

This is a great game for lots of players, especially if your kids like the Weeping Angels from Doctor Who. Get everyone to stand at one end of the playground, with one person standing at the other end with their back to the crowd. The players need to sneak up behind the person at the far end of the playground and tap them on the shoulder.

The child at the far end can turn round whenever they like, and if they spot anyone moving, that play has to go right back to the start. The first player to tap the child on the shoulder wins, and takes over from them next round.

Stick in the Mud

This game was a favourite in my own playground. You can have up to eleven players in a game of Sticky Toffee. One person needs to “It”. They stand still and each of the players touches one of Its fingers. The person whose It will then begin listing places they’ve been stuck. Good examples are stuck in school, stuck in the queue, stuck in a rut, stuck in quicksand…”

But when It says “Stuck in the mud” everyone has to run away!

If the person whose It tags them they are stuck in the mud and have to stand still with their arms and legs wide apart. If another player goes through their legs or under an arm then they are unstuck. Once everybody is stuck the game is over!

For each of these games, make sure everyone is wrapped up warm, and that everyone has a go at being “It”. Also make sure children know to tap or tig other players without hitting or hurting them. Then tag them shouting “You’re It!” and run away screaming and giggling, because they’re all children and are far too slow to catch up with you, the fools!

Then return to the tree house, den or, if you must, the house and have a nice warm drink to relax.

Sam Wright is a freelance writer who is a fan of Tig, Dodgeball and Stuck in the Mud. He works with Lawnmowers Direct, and he just tagged you so you’re It.