Not everyone is allergic to insect stings; however, it still causes alarm in most people. Distinguishing the difference between a normal reaction and an allergic reaction when stung by an insect can greatly reduce anxiety and fear. Additionally, it also reduces unnecessary medical costs.

Anaphylaxis- which is a severe allergic reaction- due to insect stings occurs in about 0.5%-5% of the entire U.S. population. In addition, at least 40 people die every year because of this. The most common culprits are wasps, bees, and yellow jackets. But there is another insect that can deliver a nasty and dangerous sting. These are red imported fire ants. These ants are now infesting more than 200 million acres in the southern area of the country. This ant specie can also be found in households and gardens. 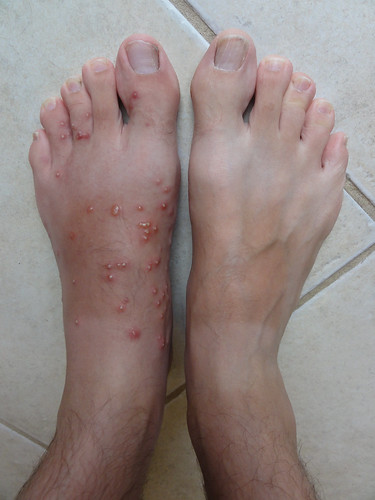 How To Identify Fire Ants

Fire ants are red-colored insects that can deliver a painful sting. When they sting, they inject venom into your skin. The venom contains a chemical known as piperidine. You can identify this ant specie with these characteristics:

Most people who have been stung by fire ants suffer from usual reactions. These reactions include localized pain, inflammation, and redness of the sting area. Other symptoms may include:

Unfortunately, there are certain individuals, especially children who are allergic to fire ant sting. They develop serious reactions to such stings that can be fatal if it is not addressed immediately. Severe allergic reactions require immediate medical assistance. Some of the symptoms of an allergic reaction may include:

Some people may also manifest more severe allergic reaction. Anaphylaxis can occur within minutes after the individual is stung and it can be fatal. If the person starts to feel dizzy or falls unconscious after getting stung, call for emergency medical treatment. The person may suffer cardiac arrest if immediate treatment is not given. If you or anyone you know had experienced an allergic reaction to being stung by a fire ant, there is a 60% chance of suffering from the same reaction or worst if stung again.

Basically, a fire ant sting allergy can be treated using a two-step method:

You have to understand that allergic reactions due to fire ant sting can rapidly progress; thus, it requires immediate medical help. Emergency treatment usually includes:

The people who are already familiar with their condition can carry around injectable epinephrine. This can help save their life in the event that they are stung while outdoors.

Due to the potential dangers posed by red fire ants, it is crucial to avoid getting stung by these nasty insects. You can use insecticide treatments to get rid of fire ants in your garden or near your home. Some insecticides contain soybean or corn meal. This bait is then picked up by the worker ants and taken to their nests. When the queen ant dies, the mound will eventually cease to exist. It is also advisable to seek professional help when dealing with insects that can deliver painful and deadly stings. Professionals know how to handle such critters and they have protective gear to keep them safe from their stings and bites.

Kris Lim is a Registered Nurse who offers tips and information concerning insect bites, their symptoms, and treatments. She also occasionally writes for pest control companies in Oklahoma City.