According to the World Health Organisation’s ‘Top 10 leading causes of death’ list, stroke is the second most common cause of death . Occurring every two seconds, it is also one of the leading causes of disability. A stroke, sometimes also called brain attack, occurs when the blood supply to parts of the brain is cut off, depriving it of oxygen and other important nutrients such as glucose. When brain cells die, the function of the body part they control is impaired or lost, causing paralysis, speech and sensory problems, memory and reasoning deficits or coma.

The way stroke affects parts of the brain is categorised in two major types: Ischaemic and Haemorrhagic stroke. Ischaemic strokes are the most common, accounting for 80 per cent of cases worldwide. In that case the artery is blocked by a blood clot, which interrupts the brain’s blood supply. In the remaining cases, strokes are caused by blood vessels in or around the brain bursting and causing bleeding, or a haemorrhage. The build-up of blood presses on the brain, damaging its delicate tissue and other brain cells in the area.

Currently there are only few effective, generally accepted and specific treatments available to treat stroke patients. These include thrombolytic therapy, early use of aspirin, decompression craniectomy, stroke unit care and constraint- induced movement therapy. Some of these therapies may only be offered to a limited group of patients due to a short window of treatment opportunity until the patient reaches the hospital, tolerability of the treatment or comorbidity. Hence patients are left with no alternative than to wait and hope for as much natural recovery as possible. This lack of alternatives is frustrating to patients, family as well as caregivers. Moreover, in the past two decades, numerous therapies with promising results in early studies have failed to demonstrate a benefit in treating cerebral ischemia in Phase III trials. A growing body of evidence indicates that patients do better with a well-organised, multi-model approach to post-stroke recovery.

Therefore, there is an increasing need for alternative and multimodal therapies to help more patients recover quickly and more effectively from stroke. In the absence of standard allopathic medicine, traditional or herbal medicines may offer an interesting route to explore in disease fields such as stroke. In addition, according to Pandian et.al patients also seek alternative therapies for stroke in Asia due to dissatisfaction with post stroke recovery options. Pandian and other colleagues published the article titled “Alternative therapies for stroke treatment in Asia” in the International Journal of Stroke. They state that “in East Asia, acupuncture/acupressure, moxibustion, herbal medicine, qigong and tai chi are used. In South Asia, ATs include ayurvedic massage, marma therapy, reiki therapy, herbal medicine and yoga; herbal baths, prayer, reflexology and ‘energy transfers’ are also used. Well-conducted trials are needed to better define the roles of ATs”.

Numerous studies have now been dedicated to the research of alternative neurorestorative therapies in stroke recovery.
One of the latest pieces of research was published in Stroke, the Journal of the American Heart Association, in June. The CHInese Medicine NeuroAiD Efficacy on Stroke recovery (CHIMES) study is an international, multi-centre, randomized, placebo-controlled, double-blind, parallel groups, phase III trial which investigated the effect of the herbal medicine called NeuroAiD (or MLC601) at acute stage of stroke. The trial has been met with a mixture of interest and criticism by some experts in the field and the media. However from a Neurological point of view, there is a positive signal and the results cannot be ignored. The Stroke paper concludes that NeuroAiD is “statistically no better than placebo in improving outcomes at 3 months when used among patients with acute ischemic stroke of intermediate severity”. However “because of previous studies on MLC601 suggested a benefit in non-acute ischemic stroke patients the time window of 72 hours was chosen for the study”. Overall the subgroup analysis suggested that NeuroAiD is more likely to benefit patients who are treated beyond 48 hours from stroke onset. “This is consistent with previously published studies on NeuroAiD, which detected improved functional outcomes and motor recovery among mainly non-acute ischemic stroke patients”. Indeed improving functional outcome and motor recovery is very important for stroke survivors. Today patients have the choice between relying on natural recovery and therapists’ help, or to take a chance on herbal compounds such as NeuroAiD (in countries where it is available). According to the Stroke paper, the results seem promising, however it is still uncertain whether they are statistically reproducible in terms of chances of benefiting patients, but they surely present a safe add-on treatment with an interesting possible effect of improving recovery.

The use of herbal supplements is met with a lot of scepticism outside Asia. Yet they are used extensively in Asia to facilitate recovery after stroke. The well-known French Neurologist Marie-Germaine Bousser published a paper in March’s Cerebrovascular Diseases journal, titled “Drugs from Natural Substances: Why Study Them in Cerebral Infarction”. She notes that “there are at least two good reasons to keep an open mind towards studying products from natural substances in cerebral infarction: the first is the constant failure of neuroprotective agents in this frequent worldwide disease which remains devastating despite treatments presently available; the second is the remarkable number of drugs coming from natural substances that are effective in other human diseases.” 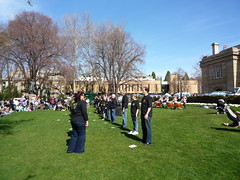