Needles vary in length, but the most common types used for vaccinations and other common injections are only about less than an inch to about three inches in length. These are thin and pointy, and, just by looking at them, they don’t present that much of a threat. Nevertheless, hospital workers are well-aware of the dangers that these minute slivers of metal can bring. Such a small piece of metal can spread life-threatening microorganisms, like those that cause hepatitis and HIV. 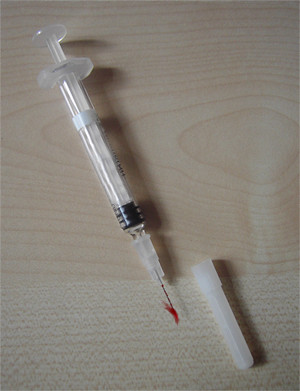 According to California based personal injuray law firm, Bob M. Cohen & Associates, around 12,000 healthcare professionals contract hepatitis annually, while more become infected with HIV every year, due to needlestick injuries. The firm, which specializes in personal injury cases, also affirms that negligence is one of the primary causes of needlestick accidents. This is alarming not only to those who work in hospitals and clinics, but also to health workers’ friends and loved ones as they can become inadvertently contaminated. Patients in healthcare facilities might also become at risk if they come in contact with a doctor or nurse who is unaware that he is infected, and so, he doesn’t take the proper precautions to prevent the spread of disease.

Can one prick effectively transmit a dangerous disease? In the hospital setting, some doctors or nurses may get accidentally pricked especially when they forget or ignore to follow universal precautions. There are several reasons why workers fail to follow standard methods of discarding sharp objects. Some, who have been in their jobs for decades, might become too complacent, while others become too tired or too busy. There are also a few who just overlook safety precautions. All of these put a person at risk for injury. The wound caused by a puncture is insignificant; it is the infectious organisms in or on the needle that people have to be concerned about. Even one prick can spread the human immunodeficiency virus or HIV and HCV or the hepatitis C virus. HIV causes AIDS, an incurable condition that causes the immune system to fail. As for HCV, this causes chronic hepatitis (liver disease) that makes a person susceptible to cancer or liver cirrhosis.

Impact to the Public and to Healthcare

Needlestick injuries affect the public, specifically hospital patients, in several ways. The most noted effect is the one related to health. A nurse, for instance, might pass on a disease to a patient by recycling used needles or by using tainted needles in mixing injectable solutions.

Healthcare workers also put their wellbeing at risk every day. But aside from the potential health problems that might be caused by needlestick accidents, such incidents also impact other elements. To illustrate, a number of health professionals might choose to leave their profession because of threats to their welfare. This can impact the industry because as the number of doctors or nurses decrease, hospitals are forced to increase compensation and benefits in order to make jobs more attractive. Medical institutions are also obligated to increase liability for healthcare in case a worker gets injured or contracts a disease while doing his job. This influences patients too as hospitals could be forced to increase their fees as well.

Claire Taylor is a freelancer who often finds time to blog about health care and safety. Through her articles, she hopes to spread awareness about common health risks.